Tom Sawyer Island: Risk and Reward or Fear and Disappointment 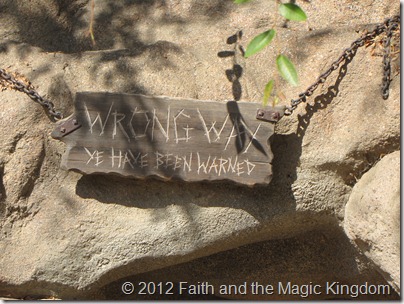 On a recent visit to Disneyland, I revisited Tom Sawyer Island (or “Pirates Lair on Tom Sawyer Island”, as it’s now called). It was early in the day, so I was able to spend a good hour on the island, exploring on my own with very few other people around most of the time.

As I did, I noticed some changes, and I don’t just mean the “invasion” of Captain Jack Sparrow and the other pirates.

Tom Sawyer Island was originally conceived of by Walt Disney himself as a place for kids to play and fully engage their imaginations. At the same time, adults could indulge their “inner-child” and play, too. There were caves, bridges, a treehouse, a fort, and more to fire the imagination and invite exploration.

Many of those features are still there, but they’re “safer” now. It’s just not the same. There is one way to go into most caves, as the sign above warns. There is one direction to cross the bridges, and usually a safety gate at the “wrong” end to keep people out. There is one way into the treehouse.

There are lookout posts throughout the island, with “telescopes” you can use. But they’re all mounted and firmly fixed in place so you can look only the direction each is already pointing (and in the case of at least one of those, it’s pointing into a tree, so there’s nothing to see but leaves). 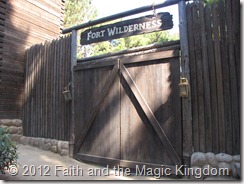 Perhaps worst of all, Fort Wilderness is locked up tight. What was once the culmination of the exploration is now a testament to “you can go no further”.

What was a once a place of freedom is restricted, reigned in, and tamed. Fear and legal concerns have diminished this island, making it a shadow of what it once was.

But at some point, that diminished—maybe after years, maybe after days—and we started to play it safe. Fear and legalism took control. Following God became following rules and being “nice”. You stay on the clearly marked path everyone else follows…and miss out on everything around you.

On Tom Sawyer Island, there is good news…if you look long enough and dare to continue the exploration. There are still places of freedom, within the broader confines of the island itself. There are caves with no signs to tell you which way to go. There are paths without arrows. And best of all, there is a treasure.

Go around the fort, and past the cemetery, the reminder that risk and adventure don’t always have a “happily ever after”. If you do, you’ll discover the treasure hidden on the island. A pirate treasure chest spilling over with gold and jewels. If you were dissuaded by the restrictions earlier or disappointed by the fort that held so much promise, you’d miss it. But if you dare to continue to press on, you’ll be rewarded.

Again, we have the same dilemma, and the same solution. We live within the broader confines of “the island”, in this case, the basics of the Christian faith: the death, burial and resurrection of Christ, loving one another, the service of all believers (according to our gifts that He has given us), and the ministry of reconciliation. You may add one or two items to that list or take one or two off, but I think for the most part we can agree on this list.

What lies on the other side of that, though, is freedom like you’ve never imagined. the freedom to live a life of love and truth, the way God designed you and serving him in the unique way He shaped you. It may not look like something anyone else is doing. It may be big, or it may be very small. It may take you someplace you never imagined or keep you right in your own backyard.

Whatever it is, it’s what you do and how you live because of who God says you are and what He wants from you—for your good and for His glory (though not necessarily in that order). Is your life characterized this way:

“I have been reminded of your sincere faith,which first lived in your grandmother Lois and in your mother Eunice and, I am persuaded, now lives in you also. For this reason I remind you to fan into flame the gift of God, which is in you through the laying on of my hands. For God did not give us a spirit of timidity, but a spirit of power, of love and of self-discipline.” (2 Timothy 1:5-7)

Question: Have you stepped past the fear and legalism, even briefly and experienced this true freedom? What was it like? Talk about it in the comments below, or on our Facebook page.