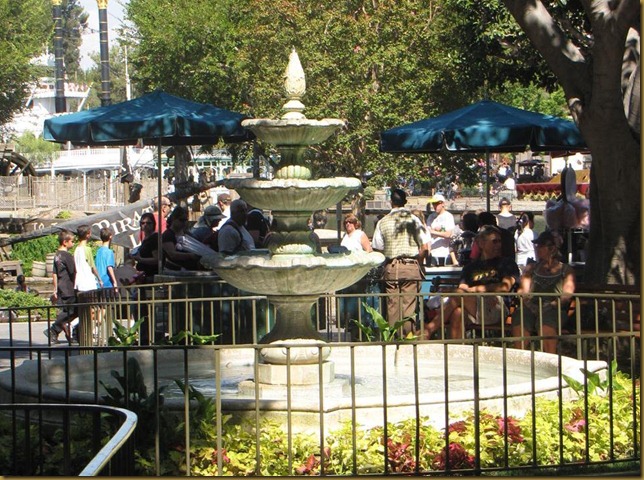 Just outside of the entrance to the Haunted Mansion stands this fountain, in an area surrounded by benches and trees. I’m sure there is an official name for this area, but honestly I have no idea what it is (if any of you readers know, please tell me in the comments at the end of this post). Unofficially, it’s called “Transitions Plaza”, and the fountain called “Transitions Fountain”.

The reason for this somewhat unusual name is actually quite simple. As Disneyland existed at the time—and as it continued to be for several years—this area marked a significant transition. Everything on one side of it (up to and including Pirates of the Caribbean) was completed or largely completed while Walt Disney was still alive. Everything on the other side—the Haunted Mansion and Bear Country/Critter Country—had most or all of the work done and opened after Walt Disney died. I talked in an earlier post about the somewhat schizophrenic nature of the Haunted Mansion, and the lack of Walt’s direction being a large part of the cause.

This lovely but unassuming location stands as a silent reminder of the time of Disneyland’s creator’s passing. It symbolically marks the place where a significant event happened.

The nation of Israel did that a lot. As we read through the Old Testament, especially the Torah (the first 5 books of the Old Testament), we see individuals or the nation stopping what they are doing to commemorate something significant God had done.

The LORD appeared to Abram and said, “To your offspring I will give this land.” So he built an altar there to the LORD, who had appeared to him. (Genesis 12:7)

There he built an altar, and he called the place El Bethel, because it was there that God revealed himself to him when he was fleeing from his brother. (Genesis 35:7)

Moses built an altar and called it The LORD is my Banner. (Exodus 17:15)

So Gideon built an altar to the LORD there and called it The LORD is Peace. To this day it stands in Ophrah of the Abiezrites. (Judges 6:24)

David built an altar to the LORD there and sacrificed burnt offerings and fellowship offerings.He called on the LORD, and the LORD answered him with fire from heaven on the altar of burnt offering. (1 Chronicles 21:26) 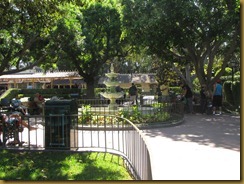 Of course we have to be careful. As we read, we see the nation of Israel build altars to idols at least as often as they built them to God. Still, those reminders were important. It’s why we buy souvenirs and take pictures when we go on vacation. To help us remember, and to take us back to those moments we enjoyed or that were significant to us.

Humans naturally tend to forget, especially when it comes to God’s care and provision for us in the past when we’re in the middle of a trial. We focus on what seems true now and forget about how He’s shown Himself on our behalf in the past—even the recent past. These altars stood as a reminder of what God had done for them.

Even in the New Testament, though we don’t see the Church building altars, we do have Jesus instituting what we call The Lord’s Supper, The Eucharist, or Communion.

For I received from the Lord what I also passed on to you: The Lord Jesus, on the night He was betrayed, took bread, and when He had given thanks, He broke it and said, “This is My body, which is for you; do this in remembrance of Me.” In the same way, after supper He took the cup, saying, “This cup is the new covenant in My blood; do this, whenever you drink it, in remembrance of me.” For whenever you eat this bread and drink this cup, you proclaim the Lord’s death until He comes. (I Corinthians 11:23-26)

We need these reminders. Communion serves as one critical one. But some people have others, too. A special place they go to. Something they keep on their desk (a rock, a toy, a photo, etc.) to remind them of a significant event. Some have a song. Some plant a tree.

It’s not something we worship, as an idol would be, but it’s something that reminds us of the One we worship and what He did in a specific time and place. Then, when we feel afraid, alone, abandoned, overwhelmed, hopeless, or helpless, we can look at this object, go to that place, hear this song and remember. And when we remember, we acknowledge that the One who cared for us then is the “the same yesterday, today, and forever.” He protected or provided then—in His time and probably in a way you didn’t expect—and He will do the same today.

Question: What do you have that stands as a reminder of God’s work in your life? Talk about it in the comments below, or on our Facebook page.